Week 1 of my 6 Week Challenge is over. My diet was already full of fruits and vegetables, lean protein, and low fat dairy. I am allergic to wheat, so that already cuts out most junk food. I was putting honey in my tea and I cut that out this week. Also, I really watched my portions and made sure no extra sweets snuck in there. I had a little heavier than regular training week (about 8.5 hours this week), but felt pretty good.

I also read a couple of nutrition books from the library, but no surprise, I am already doing most of what I am supposed to do. I think patience and persistence are going to give me as good of results as I can genetically get. And I will be happy with that. As long as I know that I am doing the right things for my body, I am satisfied with the results.

Some uplifting things from the week were: I have completely stopped having sugar cravings after meals. My sister told me today that I look thin, then she called me a bad name, so I think she meant it. I got a new outfit for work that is very flattering and that makes me feel great. If JLo thinks she has the market cornered on curvy triathletes, she better think again!
Posted by Musing Runner at 7:21 PM No comments: Links to this post 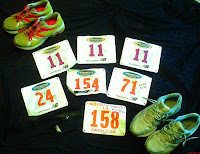 It's been a year since I started running regularly again, so I'm celebrating my first runniversary. Last June I met a friend to do a 5K and could not finish without walking. I was very humbled and even a little angry at myself. I was only 31 and it scared me a little that I couldn't run 3 miles without stopping anymore. So, I stopped "working out" and started training. I only like to race about once a month, but racing motivates me to continually strive to improve myself. Here are some "high lights" of the year:

I've learned a lot, met lots of cool people, and gained some fitness. I can't wait to find out what the next year of running holds for me!
Posted by Musing Runner at 3:45 PM No comments: Links to this post

Summer is the time of year that I start to really focus on things that I let slide during the school year when I am really busy. Last year I scrapbooked every picture in the house and painted some wall art for our dining room. The year before I made myself a weekly cleaning schedule after reading several housekeeping books and sewed curtains for the dining room. After a month of not working, I get a little stir crazy. I'm kind of at that point this summer. My training is coming along great, I'm not speedy but I am fit and can easily handle the distances that I want to go. However, since I have time and energy to focus on one area of my life, this summer I am picking nutrition. I have said in past posts that I would like to do a little better in that area. The foods that I eat are good, healthy foods, but maybe too much and not at good times... I KNOW what to do, I just don't always do it because I have family or work as a handy excuse.

Hence, THE 6 WEEK CHALLENGE, yes all capital letters! For 6 weeks I will do my best to have perfect nutrition in the hopes that once school starts again, I will have ingrained those habits and it will be easier to keep up. They say it only takes 21 days to make a habit and I have 6 weeks until my next triathlon, so why not??? This will be an experiment of 1 to see how much my nutrition plays a role in my training and results. It should be interesting and I will post weekly updates, so come back often to see how it's going!
Posted by Musing Runner at 5:30 PM 1 comment: Links to this post 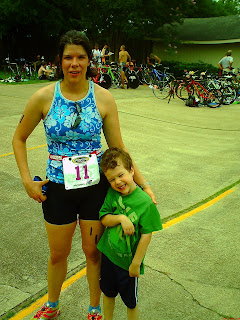 When I woke up this morning at 5 am, I was sick. Not from nerves, just sick to my stomach. I don't know if I ate something with wheat it in or just something I shouldn't have, but I felt bad. I made myself eat breakfast, load up my gear, and get going.

When I arrived at the swim club, I felt a little better, but was kind of dizzy. I set up and got in the pool to warm up. I took it very easy and decided that I would be okay.

The swim is a time trial start and we started out with more time in between athletes so the pool was not as crowded as it was 3 weeks ago. I swam by myself the whole way, taking it easy.

I made a quick transition and hopped on my bike (not the cool way, just the "I've only had clip-less pedals for about 6 months" way) and I was off. I have really been working on my biking for the last 3 weeks and I was disappointed to see 14.5 mph on my bike computer for the first few miles. I decided that this race would just be good practice with racing and being mentally tough. (BTW, when you are not fast, EVERY race is practice being mentally tough, just being there) It was an out and back course with the turn around at the top of a little hill. Once I started down the hill, I had a little break and from then on I started moving. I felt better and the wind was at my back and I started to see those numbers go up. I ended up increasing my average mph from 15.8 3 weeks ago to 16.0. Not much of an increase, but I'll take it! I even passed two people and it felt like not as many people passed me this time.

When I came into T2 I heard the sweetest sound in the world, "Hey, Mama!" There was my family and it lit me up to see them. I made a quick switch to running shoes and decided NOT to go to the potty even though I needed to.

I was feeling better, but decided not to push the run since I had to pee. I had fun talking to the volunteers, other athletes, and people walking their dogs on the sidewalk. When I got to the two mile mark, I saw that I was not making terrible time and I started to have even more fun. I finished strong and had a big smile on my face for the photographer.

Here are the results...

I have about 7 weeks until my next triathlon, but I will run the July 4th 5K and try to PR, even though it is hilly and HOT!
Posted by Musing Runner at 5:25 PM No comments: Links to this post

Okay, I have a couple of posts that are in my head and need to be written. One is about the Open Water Swim Clinic that I attended a couple of weeks ago. I want to put up my underwater video, but I don't have a copy yet. Another is my one year Runniversary coming up soon. Look for both of those in the next week or so.

These are conservative estimates, hopefully I can do a little bit better. My main goal is to get my average mph on the bike up to 16 or 16.5. That would be a BIG improvement. I'll keep you posted!
Posted by Musing Runner at 4:22 PM No comments: Links to this post