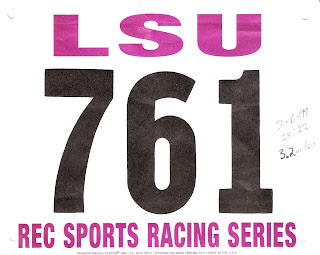 Okay, I know that you are not supposed to try and beat your times from when you were younger.... BUT when I was 21 I did not do long runs, I did not do speedwork, I did not have a nutritional plan, and I did not have an iPod or Newtons. I was just 21 and ran 3 miles a few times a week.
So I am gunning for beating this time, my best time ever in a 5K. March 28th I will run a local 5K. I'll keep you posted...
Posted by Musing Runner at 4:04 PM 1 comment: Links to this post 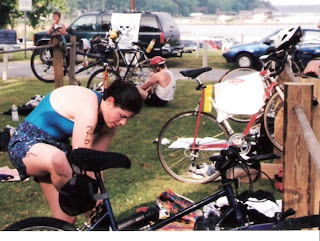 It had been 10 years between triathlons for me. That is a long time, so I'll fill in some of the background. I ran track in High School (800 m), but mostly just worried about looking cute in my short shorts. I didn't realize until I got to college that all those FAST girls were running on the weekends and not just half-heartedly jogging through practice talking about boys with their friends. You had to practice to be good at sports! I really didn't know that...

SO, I really started to love running in college and I had some friends who ran, too. One day I was in a bookstore and bought a book from the dollar bin. It was called The Triathletes and was about Julie Moss, Paula Newby-Fraser, and Jan Ripple. I don't know why I bought it, except for the fact that it was $1 and I'm a sucker for a bargain, but it changed my life. I thought what they were doing was the coolest thing ever, so hard core, so TOUGH! So, I got a mountain bike for Christmas and did a couple of sprint triathlons. My first was put on by my college and was in reverse order with the swimming in the pool. THEN I started Masters swimming and did a run, swim, run event and another sprint. I really loved it, was NOT good at it, but that did not stop me. What DID stop me was graduating, going to grad school, getting married, getting a job, changing careers, and having a baby. I never stopped exercising, just racing.

A couple of summers ago it got a little easier to have some time to myself and I began to run again. I stopped when the time changed in the winter, but started back last summer with a humbling 5K that I could not finish without walking. That flipped a switch for me and I have been on fire ever since. I called my friend R and asked her if she wanted to do some triathlons again like we did in college. She never really stopped racing, despite doing all those things that stopped me. And she has great hair, too. She is amazing. So, we made big plans and got all excited and now we are training and waiting for summer!
Posted by Musing Runner at 8:18 PM 1 comment: Links to this post 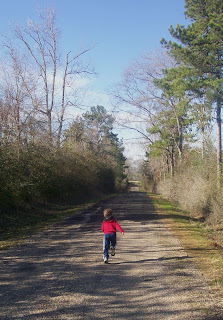 This was my first year to participate in the Simply Stu Worldwide Triathlon. (If you don't know about Simply Stu, check out his website and podcast http://www.simplystu.com/) You do the triathlon where ever you can and choose your distance. My four year old son also participated. This was, of course, his first triathlon, and he was pretty excited. We drove to the health club and he stayed in the day care while I swam my 400 yards, then I got him and he "swam" 50 yards. Then we drove home and he rode his bike .5 mile and ran .25 mile. The kid's running site that I checked for appropriate distances on (http://www.kidsrunning.com/) said that a four year old could run/ walk .25 mile, but he just wanted to run. Then he partied with dad while I biked 12 miles and ran 3.1.

This was my first triathlon in 10 years, more on that later this week, and it was special because it was a family event. It also gives me a good baseline for my fitness for later races this year. I am grateful to Stu and all who helped with the event, it was a blast.

You probably are curious about times, and in the interest of encouraging the beginner, I believe in full disclosure.

This encourages me because I cut way back for about 6 weeks after my duathlon in January because my knees were hurting and these times about about what I was doing before, so I don't feel like I lost any fitness. My next race is a local 5K in March, I'm trying to beat a 10 year PR!
Posted by Musing Runner at 6:24 PM 2 comments: Links to this post

First of all, THANKS to the two people who read this and commented. That is all the motivation I need to keep writing! (I am easily encouraged...)

I rode outside today, it was 77*F and gorgeous. About 20 minutes into my ride, I wanted a drink and looked down to find my water bottled had fallen off. The cage on my bike is so funky that a regular bottle will not fit. (What is the sound of one hand clapping? What is the water bottle cage that will not hold a water bottle? I am not existential enough to answer these questions.) SO... I stuff two Fuel Belt bottles in there and go. It works on the trainer, but not so well outside. I spent most of the rest of my ride looking for them.

According to my bike computer, which is a little off, but not THAT off, I went about 10 miles in an hour. Apparently, the speed (this is a relative term) that I had built up in early January fell off my bike, too. Maybe I should keep looking for it on the side of the road.
Posted by Musing Runner at 5:41 PM 1 comment: Links to this post

Life In The Slow Lane

Hi, all. Thanks for stopping by. I am a very slow runner, biker, and swimmer who LOVES to be outside running, biking, and swimming. I am chronicling my adventures to encourage all of the back-of-the packers or anyone who wants to go a little faster.

I did a few triathlons in college and then life intervened. Now I am getting back into racing shape to have my first season in 10 years. If you have never done a triathlon, maybe this will be the push you need to "tri" one. I am no expert, so take everything I say with a grain of salt.
Posted by Musing Runner at 5:27 PM 2 comments: Links to this post